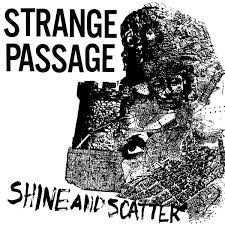 Some bands just don't subscribe do the whole social media promotion thing. Whereas most bands are sharing the very face out of Facebook, tumbl(er)ing around with the young crowd and re-tweeting and liking even the merest of hashtagof their name, Strange Passage (and indeed their label, Synchro System Records) are most notable by their sheer absence within the cyber corridors of the all pervading social media/musical promotion conventions.

Perhaps the just don't care? Perhaps it is their way of being all 'James Dean sullen sulky cool' and a s such a deliberate ploy to add to their allure? Or perhaps, just perhaps they are a Somerville Massachusetts four piece that are so supremely confident in their musical abilities that they are just going to allow their music to foster a reputation, a fan base and critical acclaim? If the final 'perhaps' is not the correct answer then it should be, for this brief four track EP encompasses more in it's sparce sub 15 minutes, than many (or most) more media savvy bands do in several albums.

In one of their few press releases to support this EP they described their sound as a mixture of Felt, 1980's Post-Punk and The Feelies and in the track Viaducts Burning Down, these reference points can be assimilated, displaying urgent rumbling vocals layered onto chunky post-punk bass lines and darker sounds. The Post-Punk 80's aesthetic is also seen in the final track, the superlative People Being People, which salaciously slathers the danker jangle-pop of the late mid to late 1980's onto a foundation that reminds me of the theatrics of Ian McCulloch / Echo and the Bunnymen.

As good as the post-punkisms of Strange Passage are, this is not where they truly excel and this is not the most essential fabric of their sound. The crux of their sound is when the treble replaces the bass to a greater extent and the guitars go more high end to provide the sort of more muscular jangle-pop sound that the likes of The Man From Delmonte, Bull n Gate bands like The Black Cillas and less sweet sounds of The Chesterfields gave to the world.

Whilst jangle-pop from the different periods of the 1980's is becoming increasingly en vogue and many current bands are doing it well, it is very rare that todays bands move forward a decade with their influences and get things so right. As such the remaining two tracks, Lament and the brilliant Morrissey inflected title track (see below) are a welcome deviation from all that is retro 1980's that currently pervades the jangled nuanced landscape.


This EP was recently released in August 2016 on download only before Synchro recognized its brilliance and have now given it the well deserved limited edition vinyl treatment...hopefully this will act as an impetus for the band to release much, much more of their incredibly vibrant sound.

Posted by janglepophub at 06:42