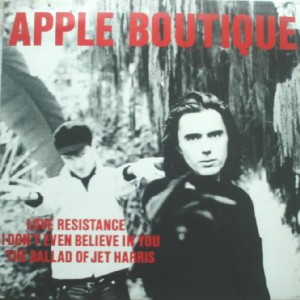 Some bloggers like nothing more than to reference a whole host of previous bands / obscure influences when writing reviews. Some even put the aforementioned bands into bold and/or italic text to highlight their sheer unrivaled knowledge to all 74 of their readership.

This is is the bloggers equivalent of the middle aged man with insufficient genitals, splashing their life savings on a sexy little red sports car (usually with a stripe of some sort on it)  that hardly accommodates their belly behind the thumb sized wheel.

Luckily for me I have no need (or financial resources) to give in to these urges and thus resist the temptation to point out that the two primary members of this short-lived 1980's band, Phil King and John Mohan, have performed with numerous jangle/dream/indie-pop luminaries over the years such as Lush, The Servants, Biff Bang Pow!, The Jesus and Mary Chain and Felt....Ooops!

Beyond the band name (both part of The Beatles folklore and a Felt track) it is Felt that perhaps act as the closest reference point. The opening track Love Resistance (see below) starts off with a typical Felt-like jangled riff that seesaws in and out of the track with various different energies, whilst at the same time inviting angular Fire Engines riffs to join the party.

t is a strange beguiling sound that might be opposites that would be considered too far apart if the smooth, slightly more robust Edwyn Collins style vocals, were not somehow able to cajole the antithesis into playing nicely together.


The 2nd track,, I Don't Even Believe In You, is equally as enticing with its The Go-Betweens style fluttered acoustic/electric guitar juxtaposition being wound around a vocal style that fits somewhere well after the Grant Mclennan prettiness and just before the Robert Forster robustness. Somehow it adds just that bit of originality to the Australian  band's template of controlled emotive lyrics presenting simple 'life experience' stories.

Although there was a CD-R of demos and outakes (that also includes the three tracks released on this EP) that was released by the Vollwert Records label in 2011, called Paraphernalia (as part of a project they embarked upon of releasing 59 CD-R's only for several early Creation Records releases) this EP remains the highly sought after and only studio work of the band.

Perhaps the primary reason why this EP remains so much in demand is due to the absolute brilliance of the final track, The Ballad of Jet Harris (see below). Here Apple Boutique return to full Felt mode and give the listener the most beautiful example of crystalline jangle-pop imaginable, as the largely instrumental track adds increasing levels of layered melodic riffs and tempo onto an aural texture that already exudes sheer beauty.

Although there are a few plaintive cried lyrics at the very end of the track, by the time they are rendered the band could have recorded an elks fart and it would not have diminished the sublime atmosphere the track had already created...It is truly one of the most beautiful tracks in my jangle-pop collection.

The Ballad of Jet Harris

Although I have still not managed to get hold of a vinyl copy and only have a digital copy of this, it still remains an EP I return to repeatedly. It is one of those wonderful gap filler releases for when you are faced with a massive musical collection and just cannot decide what to listen to...this release 'always' solves that problem.