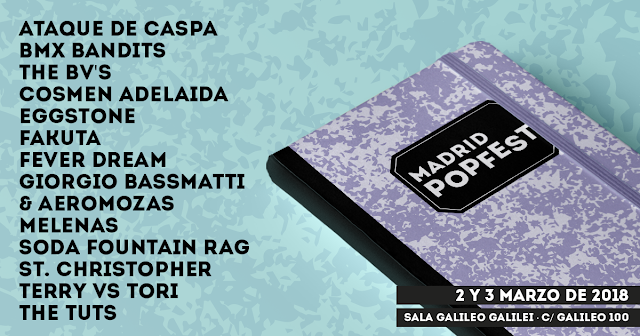 The doctrine of certain religions compels followers to embark upon pilgrimages to their respective 'holy lands'. For old indie/jangle pop devotees like myself, the Madrid Popfest is rapidly earning the right to be considered 'our' holy land.

Starting with humble beginnings in 2011, the weekend of 02/03 March sees the start of a new era for the festival, with a much larger venue secured to cope with an ever increasing popularity and arguably the best line up that the indie-pop public of Madrid has ever seen.

This articles gives a brief synopsis of the main acts performing this year. 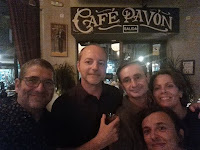 ADC appear to be one of those bands that were remembered so affectionately from their limited mid 1980's output that the 'indie underground' of Madrid, almost forced them to reform. As such they released their typically sweet Spanish jangle demo tapes from the era on the 2011 album, Supongamos, Por Ejemplo to much critical acclaim.

In fact, this on-line release proved so popular that they have now released two further albums, on two separate labels to reward the persistence of Madrid's indie-pop faithful.

In about a year, The BV's have gone from bedroom produced demos to releasing critically acclaimed album/EP's, supporting the likes of The Monochrome Set, signing for the same Kleine Untergrund Schallplatten label that houses the likes of Jetstream Pony, The Luxembourg Signal and Pale Lights. All of this has been achieved despite the main band members Fred Konstanin (Augsburg, Germany) and Josh Leonard (Falmouth, UK) living in different countries.

Following a similar success trajectory, expect them to headline Madrid Popfest next year after a sell out world tour in which they were supported by a reformed The Smiths !!!

Neon from the Speaking From a Distance album (2017)

Any mystery regarding the reasons why the Madrid Popfest  2018 organizers decided to get a much larger venue this year, was solved when they announced the Glaswegians as their headline act.

With 30 years of guitar pop brilliance behind them and with Duglas T. Stewart still the coolest man on the 'pop planet', tickets are going to be at an absolute premium to see their first Popfest visit.

The signature of such a band who are still at the height of their considerable abilities (the 2017 Forever album was one of the best in a vast, quality back catalogue) is a huge coup for the Popfest organizers and cements an increasing consensus that this is Madrid's strongest line up ever. 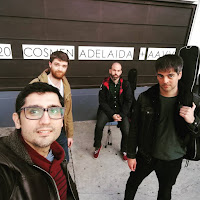 The Madrid Popfest always mixes the best of the Spanish pop scene with whatever is in en vogue and available in Europe at the time. Most of the pop bands from Madrid and its surrounds, have a glorious jangle-pop/twee-pop cuteness engulfing their sound...Cosmen Adelaida ignore this template, hammer out the drums and generally offer a far more indie-rock aesthetic, whilst still managing to remain unmistakably 'Madrileno'.


This band could be an outside bet to actually steal the show in my opinion! 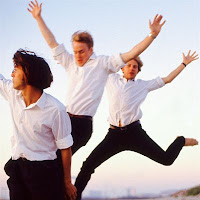 Arguably the 2nd biggest draw of the festival. This Swedish band released three critically acclaimed albums in the late 1990's and a compilation album, that cemented Madrid's affection for the band after the 1998 Spanish Slalom compilation album was released on  the popular Spanish indie label Siesta.

Indie legend has it, that the band have been working on a new material since 2000, but nothing ever materialized until such surprise the release of 2016 single Like So (below).


Whatever the status of their reunion or retirement, they have been enticed back on stage for the Popfest and their particular brand of 'made for Madrid' perfect guitar-pop is sure to receive a rousing reception from the home crowd. 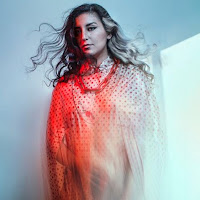 The only artist at this years fest that I know absolutely nothing about. Digging about on their various social media pages the act hails from Chile.

Further digging on Youtube reveals she has a sort of twee falsetto  vibe omnipresent, that is mixed with a 'spacey' ethos that may well act as the unofficial chill out zone for festival goers. It exudes the sort of fresh clarity that the Madrid public always lap up.

Perhaps Londoners Fever Dream were the surprise choice of the festival line up considering there sound is a mesh of all things My Bloody Valentine shoegaze and 1980's post-punk.

However it will not be much of a surprise for those owning their two critically acclaimed albums, as they have to be one of the most melodic shoegazers around.

If there has been any criticisms of Popfest's of yesteryear, it is that they have all been one paced. Fever Dream. along with The BV's, will be the perfect antidote to prevent any similar criticisms re-surfacing in 2018.

Youth (Is Wasted on the Old) from the 2017 Squid album 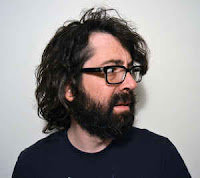 My only real reference point for Giorgio Bassmatti was his beguiling 2009 album, Kafea Eta Gallatek, which was released virtually a quarter of a decade after his previous studio output in the mid-90's.

This 2009 album was a great mixture of echoed shoegaze vocals juxtaposed with the sort of general twee basket of sounds that the people of Madrid love their pop to be served in.

In his latest 2017 release Trencadis, he drops the echo and moves towards the sort of jangle-pop that the Spanish are famed for.

Melenas are an all fermale Spanish band from Pamplona, who play an melodic almost pop-punk style of absolute brilliance that conjures up references to Murcia's The Yellow Melodies meshed with a Spanish version of 90's American band The Muffs.

I have seen this band live and can vouch for the fact that they have a stage presence that may well only be bettered by the 'Bandits'...but it will be a close run thing !

If you happen to be in Madrid on Popfest weekend and only have time to see one band live... then I can highly recommend the Melenas.

Cartel De Neon from their self titled 2017 album

It was always the danger that the one woman act of Norwegian indie-popstress Ragnhild Hoogstad Jordahl, would not translate to live performances.

However she eased such fears years ago and since her return in 2016 after a six year hiatus, has been a regular at various festivals with her two constant 'live band members' and was largely considered the star performer at 'Indie Tracks 2016'.

Her live performances are quirky inasmuch that she is a drumming front woman and throws as many quirks into her performances as possible. However for a Madrid public that thirsts after all things melodic and twee she will be considered as the perfect Scandinavian twee-pop 'ying' to a bag load of Madrid-jangle-pop 'yang'.

Keep My Headphones On (live) title track from the 2017 EP 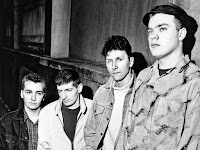 Regular readers of janglepophub will know that I have been involved in a thirty year plus love affair with this band of Yorkshire, UK origination and I am sure that many who spent much of their youth in the late 80's and 90's will have a similar sense of affection for the potted twee/jangle-pop style that they have served for so long.

BMX Bandits, Soda Fountain Rag and St.Christopher all on the same bill...it just going to be a wonderful festival this year !!!

As Good as Married from the 1996 Lioness album

Although from Seville, Terry vs Tori are most certainly capable of making a huge impression on the 2018 Popfest and out twee/ jangle the Madrid bands on their own turf.

On the back of their move to Spirit Goth Records and the brilliance of their 2017 Leap Day EP, this Popfest appearance typifies the recent achievements of a band whose star is firmly in the ascendancy and should see the Madrid crowd feasting on brilliant renditions of tracks such as the inimitable Holiday Inn.

Rapidly cementing the increasing importance of all female acts on the indie-pop scene, The Tuts have had a whirlwind couple of years, that saw them reach their goal crowd funding goals on Pledge Music within just 5 days, a performance at the world famous Glastonbury festival and a support slot with Pauline Black's 2Tone gods, The Selecter.

Initially much was made in the musical press of the multi-cultural origins of the band, however this subsided rapidly when everyone realized that their ebullient, slightly more frantic version of indie-pop, was the only thing that needed talking about.

Dump Your Boyfriend from the 2016 album, Update Your Brain

For those attending the Madrid Popfest 2018 this year, please note I officially and unequivocally beyond jealous...ENJOY !!!
Posted by janglepophub at 07:58