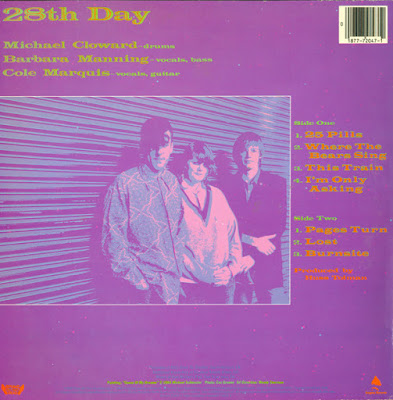 28th Day were a (much too) short lived antidote to a College Rock scene that was beginning to get lost around in the vortex of its own importance and a post-punk / new wave scene that was morphing into the ridiculous hairstyles and shoulder pads of everything new romantic.. 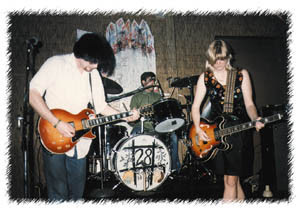 Probably the best example of the sound is the EP's closing track Burnsite (see below) in which Joy Division bass muscle is added to R.E.M tyle jangling sustenance as Manning takes complete control of everything that can occasionally be good about the subtle usage of a vocal echo machine


Despite their obvious poise with the above Post-Punk nuances, the finer moments of the album are in tracks such as Where the Bear Sings (see below) and  Pages Turn where the bass influence is diminished and the jangle is allowed to shine through with beautiful effect. To a certain extent there is an obvious Paisley Underground inflection to these tracks which fortifies an EP that offers so much to many different types of music fan.


Where The Bears Sing


This was the only release by the band before they all went their separate musical ways. As is the case with many college rock bands their star rises in cycles. As such there was an early 90's release which added a few tracks and then a complete recordings release in 2003.

However having listened to these subsequent releases, the new tracks, most of which are demos/ covers/outtakes, add little to the sheer brilliance of this EP and I would not swap my original vinyl for the world !!!

Posted by janglepophub at 06:30