Jangle-pop is increasingly changing. Perhaps some would say dying? Somehow the current movement within the genre is seeing numerous bands crank the voice decoder up to maximum 'echo spooky', add more distortion than a politicians promise to anything that threatens to even consider becoming melodically beautiful, before drifting off into areas previously only really occupied by shoegazey sorts and their mystical grumpiness.

Chook Race seemed determined to keep the sort of Triple J / Flying Nun aesthetic that characterizes much of the antipodean jangle-pop over the last 25-30 years alive. Or perhaps 'determined' is too strong a word and should possibly be replaced with 'content' as the beauty of their sound is that a genuine sense of ramshackle under-production is evoked with what appears to be minimum effort. It is like someone has provided them with the template to keep blue collar jangle fans 'content' and they feel compelled to use it. 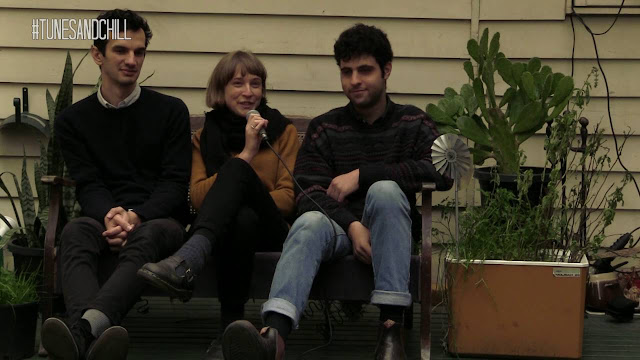 The template is simple enough but ultimately extremely compelling and is totally revealed in the opening track Hard to Clean (see below). Some sort of quirkiness around the introduction, develops almost immediately into a beautifully manicured sloppy jangled riff, that ultimately wraps around a catchy chorus line and grumbling vocals that resound rather than suggest.


And so it continues virtually throughout the entire album in a manner that may normally have those intent on brutal honesty reaching for their mouse-pads and keyboards to pen words of varying  literary accomplishment such as uniformity, conformity, sameness, samey (etc etc) and to be fair to them there will be some that will be able to back up their argument.

In my opinion though, falling into this 'monotony trap' is deftly avoided in this album on several levels. Initially there is too much dynamism to most of the tracks for them ever to become boring. Tracks such as Hard Clean, At Your Door and Pictures of You wrap all sorts of Australianisms around a rumbling, insistent strummed Wedding Present style guitar riffs, which whilst more intent on reaching an earlier conclusion than David Gedge penned tracks, still have that sort of feel...just with a vocalist who has far more energy than his British counterpart.


Similarly Chook Race avoid accusations of uniformity in tracks such as Eggshells, Sorry and the stand out track of the album, Start Anew (see above) with yet more tempo changes. This time they are provided by the much sweeter vocals, which, whilst being laconic, somewhat deadpan and pitchy (in the best possible Sarah Records manner) still manage to weave themselves into the foundation that is far more muscular than anything that ever came out of the Sarah camp...It is an usual mix but superb in its simplicity.

Music critics with actual credentials, might well harp on about the uniformity issues. just as they did (and do) about Wedding Present, Dinosaur Jr and even the early days of Teenage Fanclub. However this album is not for such high brow observers. This album is for those who just want 45 minutes of entertainment in the form of blue collar jangle that you can just head bob and stomp along to.

Chook Race provide the above better than any at present.

Posted by janglepophub at 15:43