Album Review: Rips One Into the Night by Petite League (2017) (Label: The Native Sound) 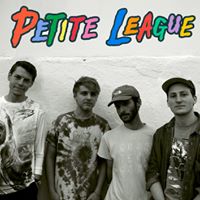 Perhaps it is just my subconscious reaction to my rapidly approaching summer holiday, but I am being increasingly drawn to various fuzzed out summer vibes with bands such as Summerays, Wavves and all manner of slacker-pop (Blake Babies especially) forcing their way into the car speakers in the final few days of my hour long daily commute.

Petite League are a four piece from Syracuse NY, born out of a college friendship between Lorenzo Gillis Cook (vocals/guitar) and Henry Schoonmaker (drums) who play the sort of scuzzed up, fuzzed filled, lo-fi, guitar-pop that fits perfectly into my recent lust for sunshine. Probably the nearest reference point is the Cloud Nothings early work.


After being signed by The Native Sound label, this album is a significantly more complete offering than their previous two albums (2015's Slugger and 2016's Hitter) and most definitely has developed a far more apparent darker lyrical intensity which is only emphasized by being juxtaposed with the 'sunshine'.


The same juxtaposition of despair and summer continues in the next track Shin Bruise which sees the contrived efforts undertaken to try and forget about an ex-love and continues in the albums stand-out track Pulling Teeth (see below) in which spring-loaded chiming guitars belie the continued lost / unrequited love lyrical theme...hurt in my heart, your a painful lumineer / I loved you more than just one night, but you don't remember me.


The same juxtaposition is constant throughout virtually the entire album. However accusations of  uniformity are avoided as the overall feel of the album is so full of dynamism and summer vibes (their truly is not a bad track on the album) that I prefer to ward off accusations of unoriginality by using the word consistency.

Get hold of this and smile your summer away.

Posted by janglepophub at 08:23