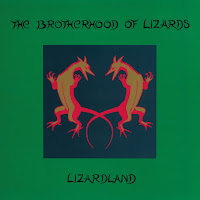 Mike Newell, lead singer and one half of the classic jangle-pop band The Brotherhood of Lizards has never appeared to be too comfortable with fame, despite the fact that in places like Germany, France, Japan and to a certain extent in the US, he is idolized for his 80's output with the jangle-pop/post-punk band The Cleaners from Venus.

He appeared more comfortable with the muted accolades received from the British music public around the releases of his 'Cleaners' output, not because he did not want his music to be successful but because he was more concerned about sticking rigidly to his own concept of musical integrity, thus causing a somewhat confrontational attitude that rejected touring or any sort of promotion beyond his pioneering of the era's cassette culture.

Lizard Land surfaced from the late 80's embers of the 'Cleaners' with Newell and guitarist Peter 'Nelson' Nice effectively going it alone. As such it is no surprise that there is obvious similarities between this album and the sound of the previous band. However to my mind there are certain fundamental differences.

The main one was obviously that the 'Cleaners' had become increasing polished over the years, with Newell going on record, in the excellent interview he gave to Richie Unterburger,  that he felt the DIY aesthetic had been lost after the introduction of new guitarist Giles Smith who, whilst never being directly blamed for the perceived demise of the band's sound, has been publicly mocked by Newell for his lust for 'pop stardom'.

In Lizardland the Newell / Nelson combo deliberately reduce the sheen of the sound by recording the album on cheap recording equipment in Newell's back garden shed, add increased flourishes of almost sun drenched west coast jangle-pop and an create altogether new sound toaccentuated the better parts of the earlier 'Cleaners' output.

These 'better parts' revolved primarily around Newell's continued ability to craft catchy jangle-pop inspired melodies around vocals dominated by the total minutiae of everyday British life. His lyrics have all the reference points that make bands like The Kinks, XTC and early Blur so prominent as they report upon the tiny lives of  'normal people' who are the likes of Anya, Cheryl, the fella in the track Happening Guy who kissed Deirdre or the market trader (Market Day) in his 'stripey shirt' and his 'bimbo girlfriend'.The vocals may not rock your world with the intellectualism of it all, but you will certainly relate it.

The album became a big hit in the UK despite Newell rather than totally because of him as his anti-establishment bent meant that he refused to tour unless the label bosses at Deltic Records let him go by pushbike...so off they went on a 3 months tour carrying their instruments on their bikes and carrying tiny amplifiers, visiting different town almost daily, being interviewed by local radio stations, busking and playing gigs.

Eventually this led to increased publicity for the band as a BBC documentary was made of their efforts. The bands old website still carries a reasonably detailed diary of these events at
http://www.stevedix.de/newell/lizarddiaries.html which is an greatread both from an amusement perspective and as a way to get an impression of Newell as a person.

Unfortunately after just a couple of albums the band broke up as Nice auditioned to become the New Model Army guitarist who he played with for over 20 years...however this one album remains a fantastic legacy to what can be achieved within the jangle-pop era and a garden shed.

Posted by janglepophub at 14:17

Email ThisBlogThis!Share to TwitterShare to FacebookShare to Pinterest
Labels: *Album/EP Reviews, Brotherhood of Lizards (The)