An Interview with Garrett Buster 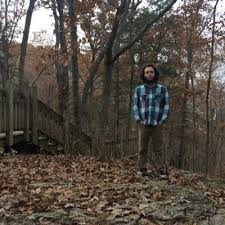 JPH sometimes gets all 'fanboy'. After discovering and reviewing Garrett Buster and his debut album Casual Storm earlier this month and getting a ridiculous amount of 'follower responses' loving his 'untitled Anthem' track (see original review HERE), we hunted him down via social media and begged him for an interview.

Fortunately he ended up being the nicest fella in the world and was happy to talk to JPH about the embarrassing drama of his long forgotten teenage tweets, his admiration for artists with quirky vocals and the CBGB scene, the difficulties for unsigned artists, the making of his album and his appreciation of Rap music.

Over to you Garrett...


That awkward initial interview question …tell us a bit about yourself?

My name is Garrett Buster, a 23-year-old musician/singer/songwriter from Missouri in the United States. I’ve been playing guitar and writing songs since I was about 13 years old. I’m not sure if that will get me hired, but it’s true.

Go on criticise us…what is bullshit in the janglepophub review of Casual Storm?

Not much of it, really…Perhaps the bit that I don’t want people to listen. That’s definitely not true, but I do like to “let the music do the talking” so to speak.

The Evan Dando/Billy Bragg comparison was kind of funny to me because I haven’t really listened to much of either artist, but I can see what you meant by it.

Some of our blog followers (and especially JPH) love the opening track ‘Untitled Anthem’…why that title?

Well, I wrote the guitar parts for the verse and chorus back in like 2012. I knew I couldn’t write lyrics to match the quality of the music, so I put it away for a while but gave it a working title. It had an 'anthem' feel to me but I didn’t want to just call it 'Anthem' or 'Untitled'.

So I put the two words together and liked the paradox of it. It was a joke title for the longest time but it turned out that I was able to incorporate that phrase into the lyrics organically, in a way that made sense. So I just kept it.

Are there any prevalent themes to the album?

I’d say the main theme of the album sort of aligns with the title Casual Storm. When a storm comes along, even if it’s a really brief one, it often alters your course of action in some way- it could be something really major or really subtle.

I think the title is fitting because lyrically a lot of the songs deal with being thrust into unexpected situations, and the various ways one can deal with that. It’s actually from a lyric in Winter Coat (Summer Breeze). I’d say most of the songs contain some sort of conflicting inner dialogue within them. A lot of the lyrics kind of take you through the problem solving process in your head.

We refer to the promotion of the album as ‘unassuming’…why no real promotion on Bandcamp, Soundcloud, Facebook, Twitter etc?

I guess I’m just always sort of thinking about the next thing I’m working on and get caught up in that rather than actively promoting the album. But that’s part of why I’m doing this interview.

Were you in any bands prior to your solo work?

I was in a band called Turning Tables in high school with two good friends of mine. I sang and played guitar and wrote the songs, we had a pretty straightforward rock sound- really influenced by grunge/90’s rock.

We played a decent number of shows but we were never really set on 'making it' or anything, it was just a fun thing to do and once college came we all went our separate ways.

What were the last three albums you purchased / downloaded?

I like buying records. The last three I bought were A Love Supreme by John Coltrane, Doolittle by The Pixies, and XO by Elliott Smith. They are three totally different albums but definitely three of my favourite albums.

Initially what drew me to hip-hop was the production side of it. The ways all kinds of different music from all eras could be sampled and recreated into something new was just fascinating to me.

Over time though I became more enthralled with the rhythms the rappers used and all the different ways rappers put their lyrics together, all of the different rhyme schemes they used and wordplay they used and so forth. I also enjoy how the personalities are at the forefront.

What are your two personal favourite tracks on Casual Storm and Why?

That’s tough to answer, but I guess I’ll go with Disengage (Ed -see below) and Untitled Anthem. Disengage is the song I’m most proud of lyrically. I had some trouble initially putting them together but they turned out great.


I’d pick Untitled Anthem because it took the longest to put together. I wrote it over the course of like 5 years, so I really cherish that process of following a vision to its end.

Your voice is ‘described as imperfect but endearing’ in our review…are there any other vocalists of similar nature you admire?

I feel like the majority of vocalists I admire fit that description. For me it’s all about using your voice to convey a certain emotion, not about singing perfectly in tune or whatever. So I really admire people like Bob Dylan and Neil Young and Lou Reed and Tom Waits as vocalists, even if they don’t have “good” voices in the traditional sense, because they are all masters of using their voice to great effect emotionally.

We give you a time machine…you can go back to any musical decade and be guaranteed success. What decade would it be and what would success look like to you?

Interesting question..It would have been pretty awesome to be part of the New York punk/CBGB scene in the mid/late 70’s. I mean just sharing the stage with Talking Heads, Patti Smith, Television and the Ramones would be success to me.

What were the last two gigs you went to?

I don’t remember which two I attended last, but the last one I attended that was really great was Fleet Foxes at the end of this summer. They’re just an incredible band, Crack-Up may have been my favourite album of the year, either that or Damn by Kendrick Lamar.

Is your name really Garrett Buster?

Yes, it is. (Ed – Sorry Garrett, it’s just too cool not to be questioned!)

Are you more of a musician that sings or a vocalist that plays music?

I’d say more of a musician who sings. I try to use my voice as an instrument rather than purely as a vehicle for delivering my lyrics.

However singing was the thing I loved most as a kid, I was singing long before I ever started playing guitar or writing songs. So I’d like to think I’ve kind of came full circle with it, as there was once a time period where I had no desire to sing but only play guitar. They’re both important to me.

Back in 2014 you simply tweeted “I need to get out of the Midwest’…why was that? Do you still feel the same?

Oh I’m sure I was just feeling angsty about something unrelated and felt that moving away would solve all my problems.

But I do still live in the Midwest and need to get out of it for my own good, as there are just more opportunities elsewhere. But I’m a lot more understanding that it may take some time. So in a sense I do still feel the same, just less dramatically.

In 2014 you tweeted ‘one of my favourite things about music is that some lyrics can take on a whole new meaning as you get old’ explain this with reference to a specific track or band?

Hmm, I don’t know if I can specifically reference anything. But I think more of what I was getting at with that tweet was comparing your relationship to music as a kid versus a young adult or whatnot.

As a kid you kind of like the sounds but a lot of the lyrics you’re unable to fully comprehend because you don’t have that life experience yet. But as you grow up and start to experience more things you connect with the lyrics in a more visceral way because you really understand them.

You tweeted a bucket list of bands to see in 2012 as seen below….how has your bucket list changed in the last 5/6 years? 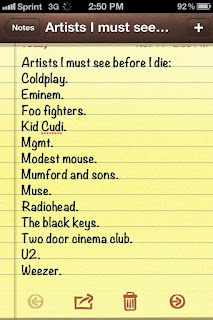 Oh man, this is making me realize people actually read old things on Twitter. Looking at that list now is so embarrassing (Ed – Ha Ha sorry man!) but not so much because of the music choices but because of how inauthentic it was at the time.

But honestly Radiohead is the only artist on that list I’d say that I have to see before I die. I still like most of the others, but once again I was much more dramatic on Twitter in the past.

Describe your life in 3 movies?

When are your future plans in terms of releasing further music?

I’ve been pretty heavy in the writing process of my next album. I’m hoping to start recording in early 2018. No idea when it will be finished or released but hopefully sooner than later.

What is the most difficult thing for an unsigned artist to overcome in order to move their music forward.

Maybe just the feeling that there’s just too much out there, that it seems even harder to be noticed now because everyone can release music now, so what’s the point?

But as long as you don’t forget why you started playing music in the first place and have the right amount of passion, it makes it so much easier to keep grinding.

JPH -  Many thanks for talking with JPH Garrett and keep us in the loop for the release of your next work. We are all looking forward to it immensely. 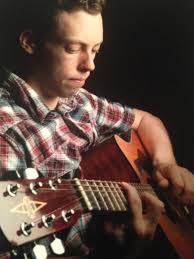 Support the artist at

Posted by janglepophub at 09:44