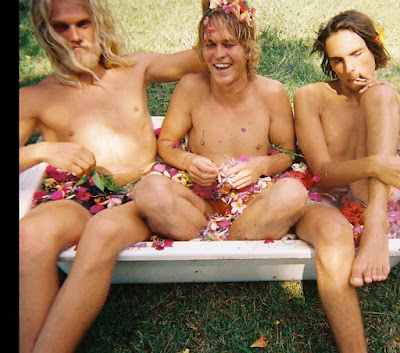 The Babe Rainbow are a three piece on the same Australian, psych loving label (Flightless Records) that popularized King Gizzard and the Lizard Wizard to whom they are often lazily compared. In my opinion, The Babe Rainbow's version of psyche is far more melodic, spaced out, quirky and ultimately more appealing than the somewhat cleaner KGATLW sound.

In fact they could be considered the professional 'weird psyche band'. Assigning weird band member names (Blue Spirit, Kool Breeze and Arrow), ensuring promotional videos contain at least one dancing Jesus and slathering slick layers of wah wah to twanging guitars to create a romantic, summer vibe that is completely alien to the strange Monty Python-esque lyrics (see Secret Enchanted Brocolli Forest below). It all adds up to a mess, but a fantastic, interesting mess that is kept together by some beautiful lead guitar work..

However, it is a sound that is best served in smaller doses which is why I prefer this 2015 EP to the 2017 album of the same name (includes all the four EP tracks) but avoids the persistent irritation of throwing in strange musical effects and flaky vocal stylistics on a seemingly random basis, usually mid track that often blight many of the non-EP tracks..

In comparison the strength if this EP is that it is just four solid chunks of psyche that meets a need whenever the mood arises, with Love Forever (see below) being the gorgeous stand out track.

Posted by janglepophub at 10:42