Album Review - Edge of a Dream by The Jangle Band (2015) (Labels: Pretty Olivia Records / Off The Hip / Egomaniac Music) 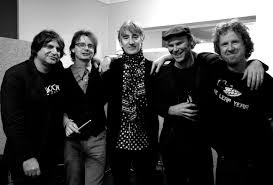 Things I love get bastardized. Poetic social commentary is forgone for rappers informing how to kill in rhyming couplets. Tranquil, skillful 5 days cricket now gets more attention when played by huge thugs clubbing the ball with a plank for two hours a night and getting huge sums of money for regularly scoring 19 runs off 7 balls.

The concept of books/novels is being challenged by two line internet micro-stories that clever sorts then attribute 97 pages of meaning too and German '63% Glonckenspeil Reisling' makes the fine wine top 20 as published by Supermarkets R Us...blimey even the 'bun' is now seen as a viable addition to the list of possible hairstyles for a man.

Jangle-pop has certainly not escaped such bastardization. In the last five years the guitar melody has drifted increasingly towards all things shoegaze and as such seems to get forced through the echo, reverb and fuzz productions tubes so that it fits more precisely with the vocals that have already been tortured in the same manner.

Therefore when I heard that former members of some of the more melodic Australian power-pop bands (Rainyard, Header, The Brittanicas, The JAC) were sharing files (I suppose bastardization is not all bad!) and were going to release an album under the name The Jangle Band I felt extremely confident I was going to get the 'real thing'. My expectations were more than met.

In this album (originally out via Pretty Olivia Records) The Jangle Band safely tuck away the power-pop and everything '12 string jangle' is propelled to the forefront resulting in a sound that strictly references late 60's Byrdsian beauty, as tracks such as the title track, Love You Too (see below), Kill The Lovers, This Soul Is Not (see above) and 282 stroke the listener through an absolute aural assault of pleasure and restore faith that jangle-pop will always be out there in its purest form...somewhere.

This album is also available with 5 extra tracks on the split release with Joe Algeri's own Perth based Ego Maniac Music and Melbourne's Off The Hip Records...I have not heard these extra tracks yet but I can pretty much guarantee they will be fantastic !!!

Their Facebook page states they are sharing files again for a new album...I cannot wait.

Posted by janglepophub at 18:29