I went to a rough school. My class was full of council estate kids and although the majority of us were harmless, we were very lackadaisical about the whole concept of education, preferring school for the social opportunities it opened up to us to smoke, drink, fight and attempt congress with the opposite sex.

Two best mates were notable exceptions to this norm, Duncan and Franny. These characters were different inasmuch that they were middle class kids from the 'right side of the river', whose parents paid for their own house and always looked as if they were going to play golf, such was the neatness of their appearance and lacquered hairstyles. They also took to the whole concept of education with  relish and were considered incredibly bright by teachers who used to smile at them a lot.

Such kids would ordinarily be bullied for their weirdness, but, as i said these two were different. Different inasmuch that Duncan would spend most of his free time drawing elaborate pictures of his classmates being decapitated by whatever weapon was the recent feature in 'Just Nutter Monthly' and Franny took great delight in planning the future torture of small animals on fireworks day, whilst Duncan gleefully drew his interpretation of the forthcoming graphic gore fest.

In effect I am certain that if they lived in the US and not the UK and thus had greater access to guns,  they would have been the subject of one of the numerous school massacre documentaries that we all pretend not to be fascinated by. Such was their complete and utter unfettered craziness.

This 2013 Summerdaze release reminds me of these two characters. It is played to a beautiful jangle sheen, juxtaposing some quite beautiful and traditional treble guitar playing to a chiming eastern Asian caricature secondary guitar sound (think Hong Kong Garden by Siouxsie and the Banshees without any wailing in the background, with the best example being the track Girlfriend below). It is all strangely original and pretty...you know the sort of stuff that would make a 'teacher smile'.


But like Duncan and Franny, behind the seeming perfection of all things 'nice' there is a definite sinister instability to the album that is revealed within the lyrics.

Initially the early album track Girlfriend intimates at a fundamental loneliness and sense of all things  egotistically irrational as the vocalists insists that he is going to go to (presumably) his friends school and kiss and date his girlfriend:

This dominant 'girlfriend theft theme' (also seen heavily in My Eyes Are Glued) seems harmless enough until we get to track 4 of the album, Swish (see below), which reveals the true 'Duncan/Franny' motive of proceedings the deliberations are made upon what a wonderful life he will have with his friends girlfriend that he appears to have just kidnapped !!!

The other general theme of the album again reveals a troubled soul behind the prettiness of the jangle and concentrates on the somewhat deranged response to being dumped by an ex-love. Here we see that killing her dog and trashing her goods seems a perfectly rational reaction as seen in the track Out of Sight, Out of Mind:

Oh patty cake, the Baker's man
I threw your toys, in the trash can
You'll learn to never mess with me again
I trashed your goods, now I win

Ashes ashes they all fall down
I stole your dog, look at that frown
You'll never see your love again
I stole her straight from her playpen

The fact that the above lyrics come from the product of one man (Summerays is a solo act ) means he may be one to be avoided, especially if you are in his vicinity and he starts drawing pictures of your head exploding or of animals with fireworks in their orifices !? 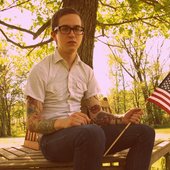 By the end of the album, which is a hugely enjoyable listen of quirky surf/janglepop, it is easy to become a little bit unsettled (in a good way) to what you have been listening to. Unless of course you are a Duncan and/or Franny type and then it may well be the soundtrack to your next act of calculated violence.