Album Review: So Far by the The Orange Peels (2000) (spinART Records) 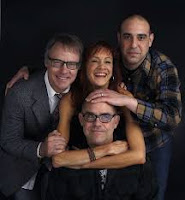 Remember 'that kid' at school who was perfect. Not for them the covering of school books with old discarded wallpaper as daddy's PA would laminate them, thus helping to ensure that consistent academic success was achieved without the need for genuine contemplation.

Not for 'that kid' coming off a muddy soccer field on a winters morning, legs purple with cold, snot pouring mouth bound, caked in three quarters of the field, with a sending off, an own goal and parental disappointment as the main reminders of the match. Oh no, 'that kid' usually came off the pitch shoulder high as supporters and team-mates celebrated his hat-trick that ensured a win that masked your ignominy.

As for mud? Simply not 'that kids' problem. His return to the dressing room rarely warranted a shower, although he had one, complete with raspberry shower gel, because he was so damned perfect!

As much as public adoration seemingly engulfed 'that kid' very deep down he was loved and loathed in equal volumes. The sheer imperfection of his perfect persona was sickening to many, as even beyond the obvious jealousy he aroused, there really was no actual substance to 'that kids' personality other than being a total caricature of all things that were good about himself. In short an occasional display of a little bit of 'badness' would have made him a more rounded and affable person.

The Orange Peels, or more specifically the version of them represented on this album, reminds me of 'that kid'. Everything is just that little bit too perfect with the brilliant twanging guitars seen in a track like Back in San Francisco (see below) preventing the line from jangle-pop to twee ever being crossed and the radiating 4 x 4 template for jangle-pop perfection being strictly adhered to at all times as we get typical sing-a-long 'ba ba ba chorus' lavishly drenched in sunny Byrds/Beach Boys melodies.

Its all very intensely beautiful and if a musical 'that kid' was to create a jangle-pop coaching manual (which, lets face it, is the sort of thing a 'that kid' might deem necessary) this is the album that would be most frequently referred to in its compilation. However like every manual, of every training course that has ever been attended in the history of man-kind it is instantly forgotten once you leave the training room as there is nothing that really makes it 'pop' in your mind.

Occasionally The Orange Peels flirt with casting aside their quest for perfection and display just a little bit of grit from their souls. It is in tracks such as Pattern on the Wall (see below) and Mystery Lawn that the band truly excel replacing the typical template driven sunshine allegory by lyrically addressing a friends heroin addiction and a harrowing account of bullying respectively. Both these tracks have an Belle and Sebastian atmosphere (not sound) to them as they couch nasty prose within a beautiful sound.

To my mind this is the least impressive album in a back catalogue that became increasing significant from a jangle-pop perspective in the bands later years.

Posted by janglepophub at 16:32